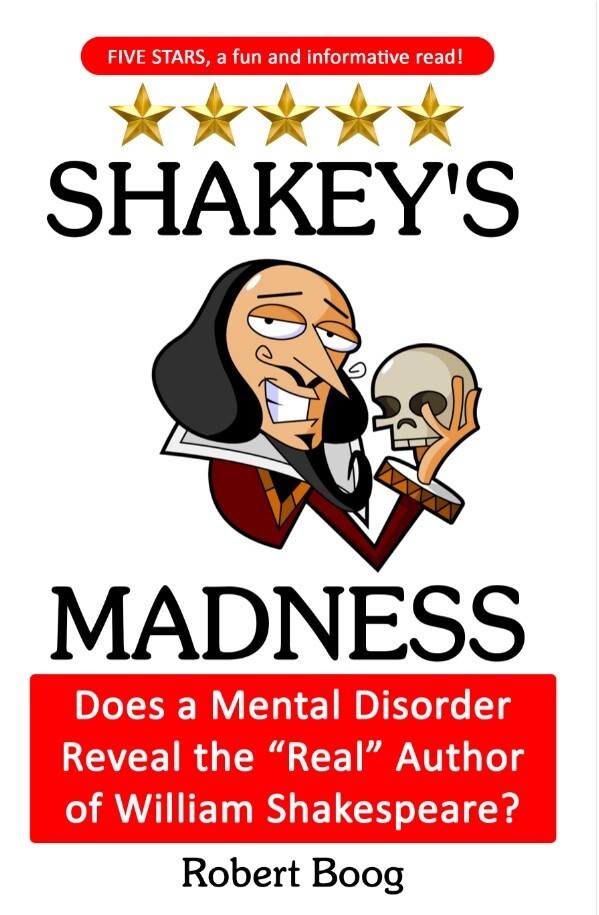 One of the most hotly fought-over debates in literary history concerns who wrote the works of Shakespeare. Did William Shakespeare from Stratford-upon-Avon write the poems, plays and sonnets attributed to him, or did someone else?

Shakey’s Madness: Does a Mental Disorder Reveal the “Real” William Shakespeare launches February 14th, this Valentine’s Day on Amazon.com and other bookstores. This book might blow all other theories away. Why?

New research has discovered a “smoking gun” to the authorship of the “true” author: it is the real author’s mental health. In his book, author Robert Boog takes the reader on an investigative journey where step by step he provides evidence that shows not only why it is unlikely for William Shakespeare, the man from Stratford-upon-Avon to have written the Shakespeare canon, but why another candidate’s mental health matches that of the “real” author. Wouldn’t that prove the “real” Shakespeare’s authorship?

In Shakey’s Madness: Does a Mental Disorder Reveal the “Real” William Shakespeare? Boog also answers these three questions that academics have often pondered:

1. If the “real” author was a nobleman, why would he give away his authorship masterpieces to a commoner?

2. If William Shakespeare acted as a front for a nobleman, wouldn’t there need to be a massive conspiracy to hide the secret?

3. Does the proof match the author’s style, authorship brilliance and personal imprimatur?

Here is what reviewers of Shakey’s Madness have said: “I thought Shakespeare was old and boring, but this book is remarkably interesting. I could not put it down once I started. It all makes sense.”

“I recommend this book! Well-written with a lot of factual information about WILLIAM SHAKESPEARE to back up the claims which is great!”

“Shakey’s Madness is very entertaining, yet the author expresses kindness too which I liked. My brother has bipolar disorder and I liked how the author shows that it does not define people. It did not stop the real author of Shakespeare from having a successful life.”

If you are like me and enjoy conspiracy theories and true crime stories, then listen up. Have you heard that William Shakespeare may NOT have written his own plays? You haven’t heard about it? You need to read Shakeys Madness by Robert Boog. He gives a very good account as to who could have potentially written the plays instead of William Shakespeare! He has gone in depth with research and best of all, he provides his sources. Then he suggests for you to Google them to see for yourself. He makes some really good points! Shakey’s Madness, which is about the real author of WILLIAM SHAKESPEARE is well worth a read!!

Save this product for later
Display prices in: USD

Another Song for Dog Lovers